Change the World with Sustainable Food

The program is designed for people who have a passion for food, fair trade and sustainable practices that protect our environment. You can earn a certificate or degree-- and gain real experience with industry experts.

Reach out to get started

The Sustainable Food Systems program is designed for students who work in the food service industry as well as newcomers who do not have a culinary background.

Watch this video to hear what graduates have to say about the convenience, flexibility and affordability of this program.

Ready to get started now for spring? Enroll at www.riosalado.edu/food. Classes start most Mondays!

Learn more about the sustainable foods movement in America—and at Rio Salado's Café at Rio in this RioNews feature.

Rio Salado College is committed to its Sustainability Pledge. The college has incorporated sustainability as a core value and has developed several programs and practices that embrace the sociocultural, environmental and economic facets of sustainability. It’s not just a matter of teaching others how to be sustainable-- Rio Salado strives to be a leader in environmental responsibility by incorporating earth-friendly practices throughout its daily operations.
Posted by Rio Salado College at 12:49 PM No comments:

Let's Get Nano: The Giant Growth of a Tiny Industry


24-year old Caitlin McGough is not exactly the person that comes to mind when you picture a nanotechnology geek in your head.

That’s if you’re even familiar with nanotechnology in the first place.

No pocket protector or taped-up glasses, the outgoing self-described science nut is applying for a job in one of the fastest-growing sectors of the economy, and the prospects are good.

“I needed another class to satisfy my financial aid, and the nanotech class seemed really interesting. I took it and fell in love with it,” she said when she signed up for online classes at Rio Salado College in Tempe, Ariz.

“Nanotechnology embodies everything that has to do with engineering, chemistry, biology and science, and [then] puts them together with technology to form something that’s new and different.”

A nanometer is one-billionth of one meter, 10,000 times smaller than the diameter of a human hair. “We're talking atoms and molecules here,” says Dr. Rick Vaughn, the faculty chair for STEM initiatives at Rio Salado. “These are the building blocks of all matter.”

When scientists work with them, they have to use so-called clean rooms to guarantee the nanoparticles aren’t contaminated or even destroyed during experiments.

“To put it in perspective, even a follicle of hair or a skin cell falling off across your sample would be kind of like the Eiffel Tower falling across the landscape of Paris,” Vaughn says.

“It has the potential to completely destroy it.”

Scientists are using these tiny particles in, well, almost anything.

Nanoparticles are used in the commercial production of everything from hydrophobic (water-repelling) clothing and digital storage, to the production of puncture resistant tires, cosmetics, and even a paint that will “heal itself” if scratched.
“It’s not just that the particles are smaller, it’s that things are going to behave differently at that scale,” says Vaughn. “That’s what makes them so incredibly powerful.”

Carbon nanofibers, for example, are used to make ultra light and strong bicycle frames. The carbon atoms arrange themselves hexagonally at the nanoscale. They’re rolled into nanotubes, which are crafted into a bicycle frame that weighs about two pounds and is geometrically lighter and stronger than steel or aluminum.

The explosion of commercial applications for nanotechnology has created a huge demand for jobs, with no real end in sight.

“Technology innovation, development, and manufacturing is a very diverse area of expertise and a very diverse job market,” says Barbara C. Lopez, a research engineer at the University of New Mexico (UNM). It’s so dynamic, Lopez says, that it’s hard to put a number on just how many jobs will be created in the next five years.


Revenue growth, though, is a different story. It’s pretty easy to put a finger on that, although it may be harder to get your mind around. One small segment of the industry known as BioMEMS “is estimated to double in revenue from $2.8 billion now to $6.1 billion in 2023,” Lopez says. Nanotech will provide “areas of tremendous growth and opportunity for today’s students,” she says.

Matthias Pleil, also a researcher at UNM, says that the job growth rate in the MEMS field alone is between 10-15 percent per year, which he suspects is indicative of the nanotechnology industry as a whole.

The jobs are not limited to high-end scientists, either. In fact, UNM’s Lopez says the people who can operate and fix the machines that are designed by Ph.D.s are the ones who are most in demand in the job market.

But therein lies the problem, according to Lopez. The United States has a shortage of skilled technicians, she says.

“There is a roadblock to growth in nano and microtechnology," says Lopez. "It’s that we do not have enough skilled technicians to fill the need to grow the industry.”


Pleil agrees that there is simply a sheer lack of people.

For example, “A large company in New York hired 400 engineers and about 1,000 technicians a few years ago,” Pleil says. The company, Global Foundaries, had a hard time finding people.

The pay is pretty good for someone with a certificate or associate degree. According to an online job search site, a technician in the nanotechnology field averages $57,000 a year in Arizona. That degree also puts future technicians in a good place to pursue a bachelor’s degree in the nanotech field, which opens doors to higher paying jobs.

McGough has just completed her coursework at Rio Salado College and is in the process of distributing her resume. More likely than not, her search won’t last too long.

“Technology is at the forefront of everything,” McGough said. “No matter what, I will always have a secure position in the marketplace.” 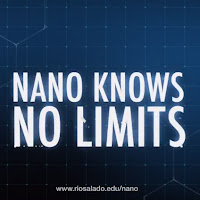 See where it takes you!

www.riosalado.edu/nano
Posted by Rio Salado College at 3:14 PM No comments:

We hope you enjoy a happy and safe holiday season-- and a prosperous New Year!
Posted by Rio Salado College at 4:34 PM No comments:

Learn about his educational journey-- and vision for the power of education to improve the lives of others in this ASU Now interview.

Posted by Rio Salado College at 1:31 PM No comments:

The ParalegalEDU.org team interviewed our Lead Instructor Emily Klein Alice, who is a J.D.; Professor at Law, to share insights about what makes our program unique. Check out the interview now: www.paralegaledu.org/rio-salado-college-interview.

“Being an online platform that offers flexible start dates, Rio draws a diverse student body at various stages of their lives,” said Alice. “Our industry-specific curriculum accommodates any type of student regardless of their legal background or experience.”

Rio Salado’s Associate in Applied Science in Paralegal program was recognized for the following:

We take pause to join you and the nation in saying goodbye to our 41st President George H. W. Bush-- and honoring his service to this country.
Posted by Rio Salado College at 11:52 AM No comments:


Bob Upham was ready to retire from a 30-year career as a civil engineer but wasn’t sure what he wanted to do for the next 15 years of his life.

“I couldn’t sit in a rocking chair on my front porch at the age of 52. I would go absolutely insane,” said Upham who worked for the Arizona Department of Transportation and the cities of Chandler and Phoenix.

“I was the guy who would stand in front of people at public meetings telling them why ripping up the street in front of their business for the fourteenth time was such a good thing,” he said.


But as uncomfortable as that may sound, Upham realized that it was during those public education meetings that he developed a passion for explaining things and ultimately, for teaching.

“Throughout that whole process, I found a love for education,” he said. So Upham decided to become a teacher and that’s when he learned about the Robert Noyce scholarship program through Rio Salado College’s Teacher Education program in Tempe, AZ (See related RioNews story).

Through the National Science Foundation, the scholarship provided a stipend to cover tuition, books and other needs directly related to the teaching program. "It's effective, and is making a difference," said Kimberly Tobey, Rio Salado’s Director of Field and Student Teaching Experiences.

The Noyce program is designed to train and certify K-12 teachers in the fields of Science, Engineering, Technology, and Math, or STEM. It requires them to commit to teaching in high-needs school districts, which typically include those that have a lack of teachers in certain subject areas, such as STEM.  Upham got a job as a math teacher in the Kyrene school district outside of Phoenix.

STEM candidates are in high demand across the country and the National Science Foundation utilizes the grant opportunity for higher education to impact the critical teacher shortage. Upham says he probably would’ve become certified at his own expense even if he had not received the scholarship, but said that being part of the Rio program made it a much better experience than if he had gone it alone.

“I had a bunch of people around me [at Rio] that cared about my success,” Upham said. "I wasn’t just a student at a school. I was part of a program that supports and cares for their students. And that continued when I was teaching in the classroom.”

Upham has already fulfilled his two-year commitment to teaching in a high-needs area and could choose to go anywhere in the country now. But he says he has no plans to leave the Kyrene middle school classroom. “I like what I do. I like where I teach and I like my students.”


His commitment has not gone unnoticed by school officials. Based on improved test scores in his classrooms, Upham has been recognized as one of the top educators in the Kyrene district.

Tobey says Upham’s decision to stay in Arizona is a plus for the Rio Salado post-baccalaureate program. She says the program to certify adults who already have a bachelor’s degree flies somewhat under the radar.

“Most of the time in Arizona you don’t think about Rio Salado as having a post-baccalaureate certification program, even though we’ve had it for 18 years,” says Tobey.

People like Upham can get certified in a high needs area like STEM “and not have to go into debt to do it,” says Tobey. “What Bob’s award shows is the quality of Rio’s Educator Preparation Program, and more importantly its program completers, are impacting local classrooms, preparing a strong STEM workforce, and meeting a nationwide shortage."

"I'm preparing the future generation of engineers," says Upham. "What could be better?"